With Capistrano well under way, I turned to another big work area - San Diego. While I was drawing the parts for the new San Juan Capistrano depot, I also finished a rough drawing for my rendition of the Santa Fe depot in San Diego. I realized that I would not have enough space to put the full size of it on the layout. 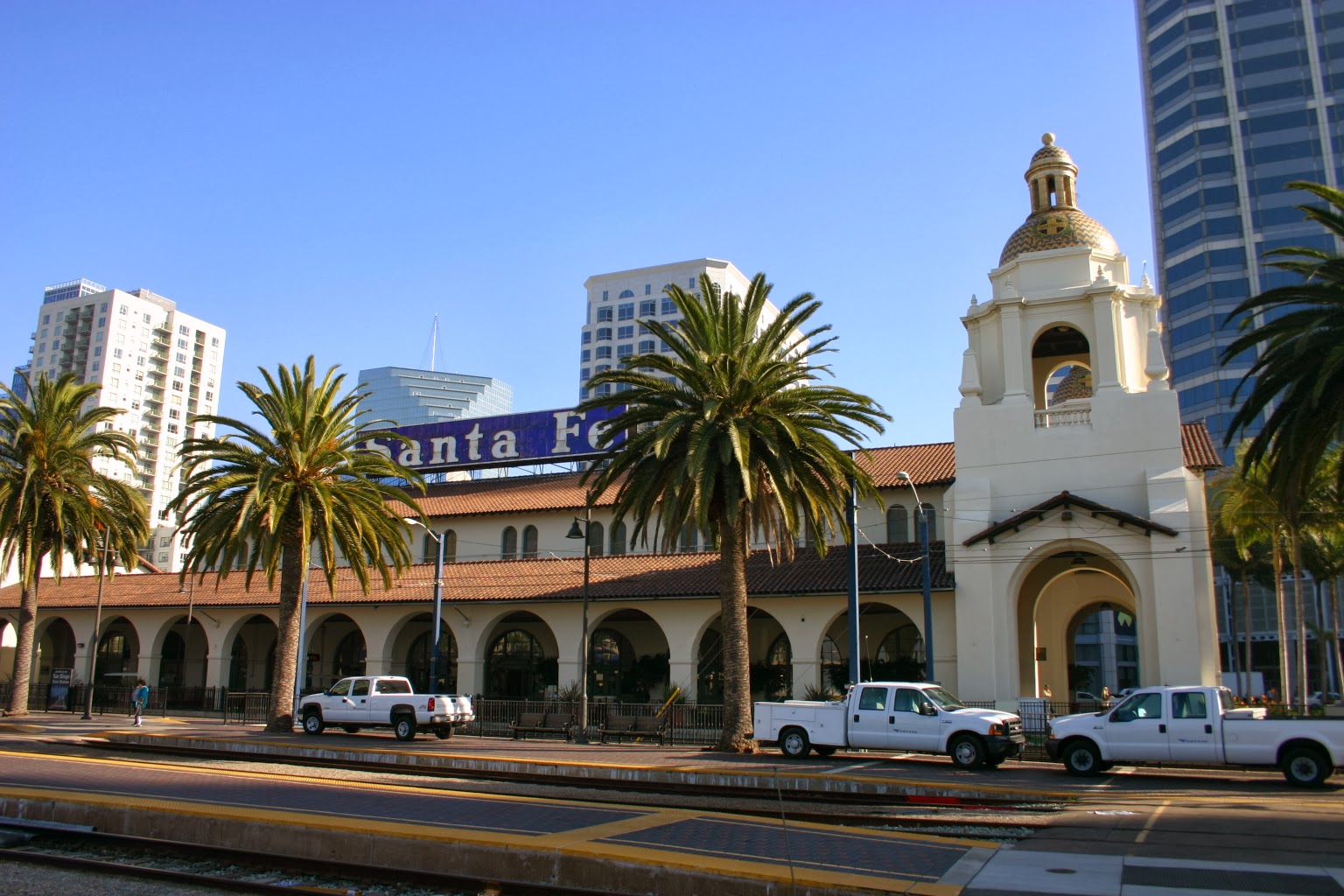 After measuring the available space I decided that what is pictured on the photograph above, would perfectly fit. On the original there is almost the same size with another 11 arches to the left. 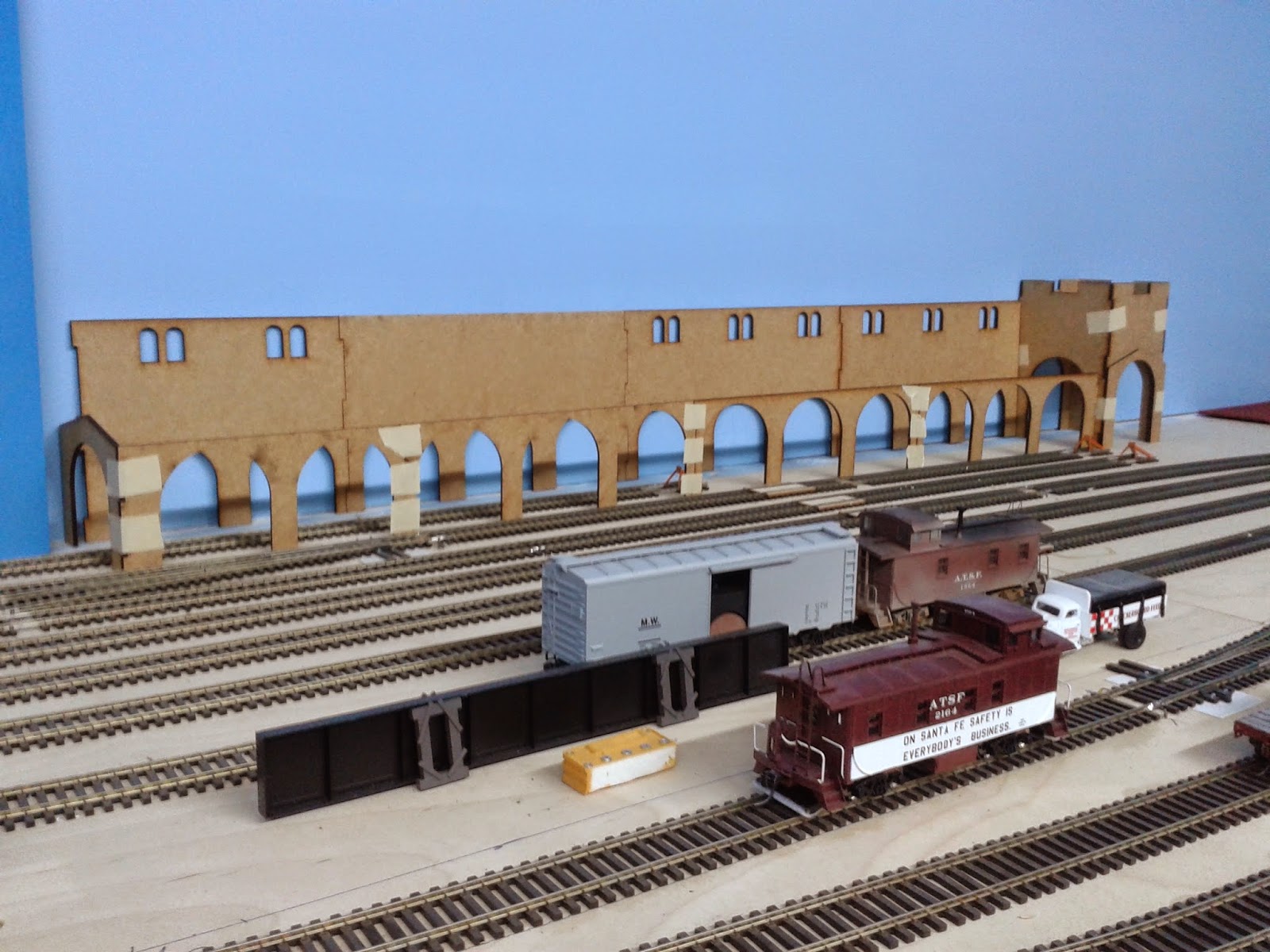 From measurements on the pictures I took during my last vacation in San Diego, I came up with about 1.25 metres (approx. 50") for the model. I got the wall segments laser-cut and they were basically just a copy/paste of the master and joined with tabs and slots. 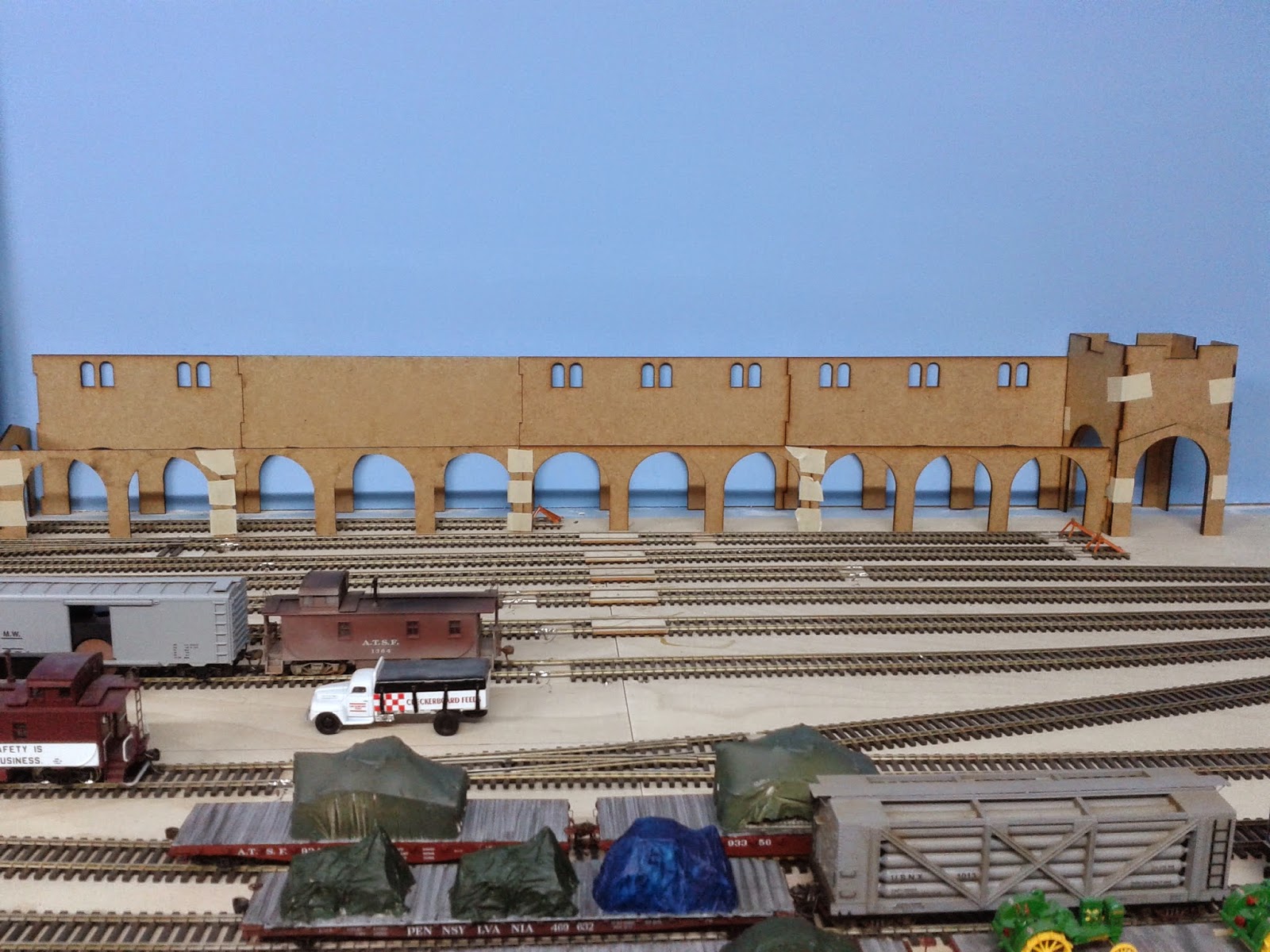 The Depot at San Juan Capistrano in the 1940's

My actual model of the Santa Fe depot in San Juan Capistrano is like it looked in 1962 with the orginial lettering when it was built in 1894. 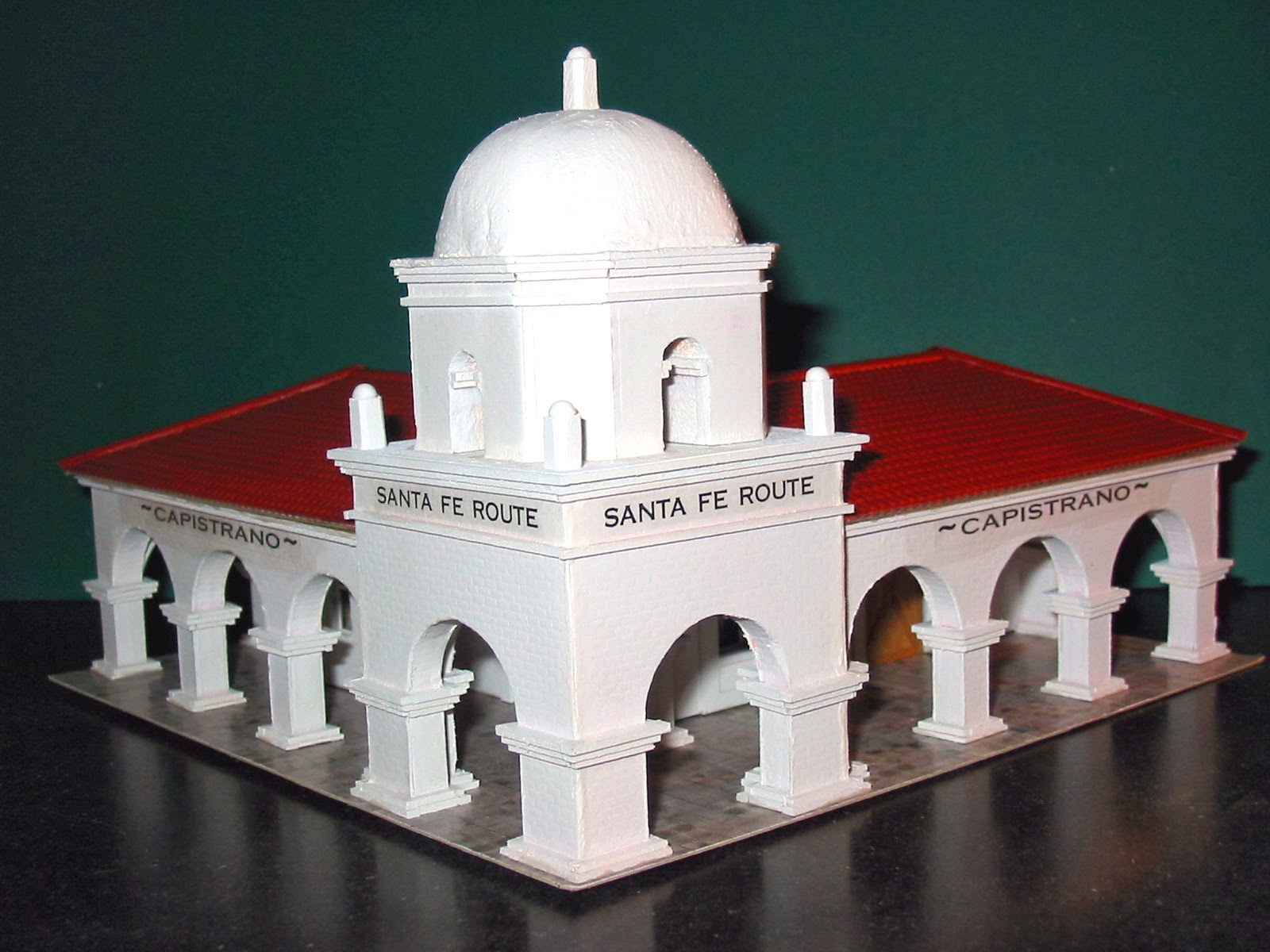 I had built this depot for a contest and just for fun because I liked the mission style architecture.
When I decided to model the Surf Line it was clear that San Juan Capistrano would be one of my signature towns on the layout and as I already had a model of the depot and freight house, this would make it even easier....I believed. 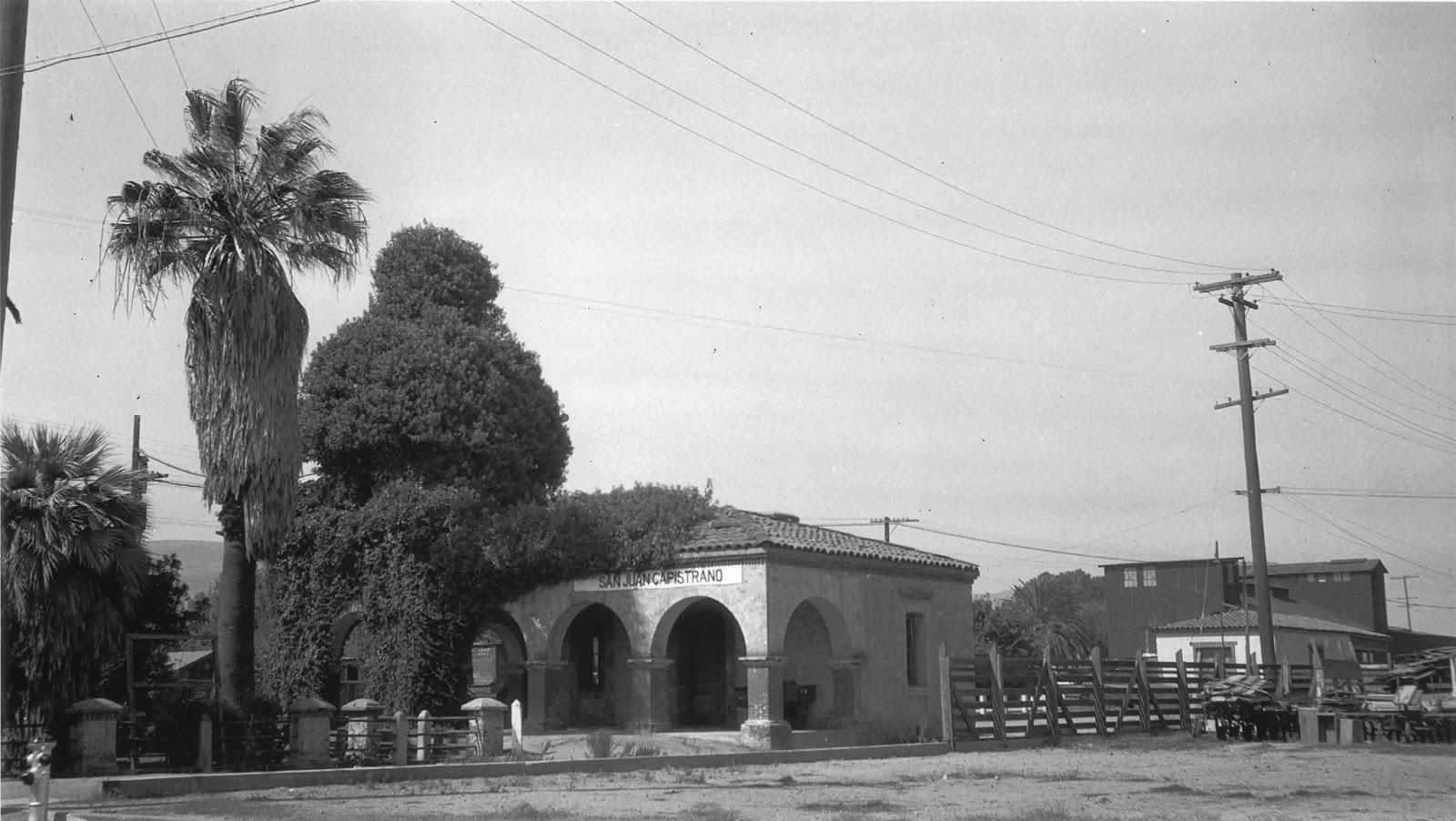 When I decided to set the era in the 1940's and while studying photographs of that period, it became obvious that I could not put the shining white depot on the layout. The original depot was covered with vines and ivy leaves all over the bell tower and large parts of the roof.
Building the bell tower with the dome and the small ornaments all around was quite a challenge and so I did not want to cover all this work with foliage. 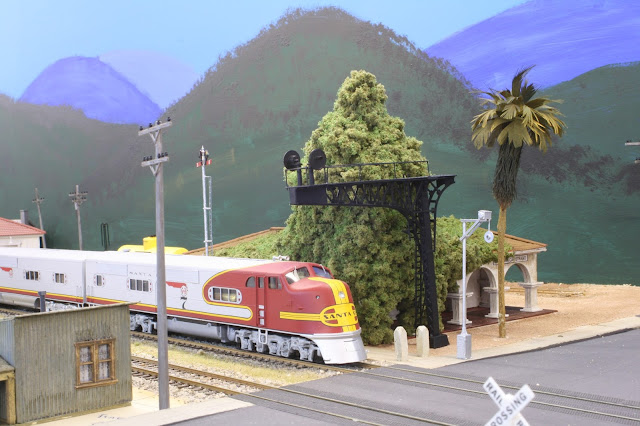 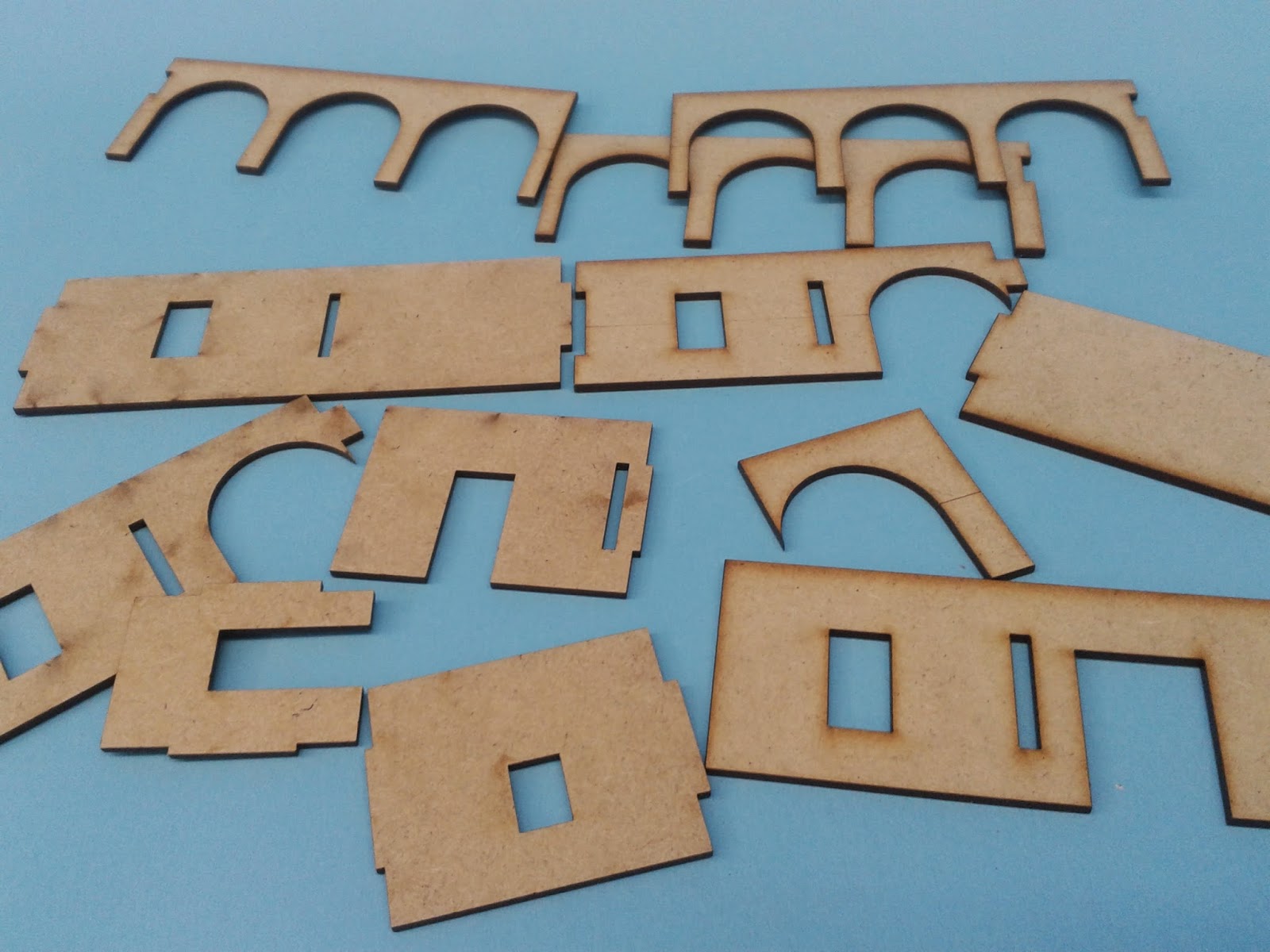 When I build the first Capistrano depot I already had the main structure lasercut, so I decided to make another run and build a new depot. This time saving me the hassle of building the bell tower and dome. Above are the main walls and collonade cut from 2.5 mm MDF. 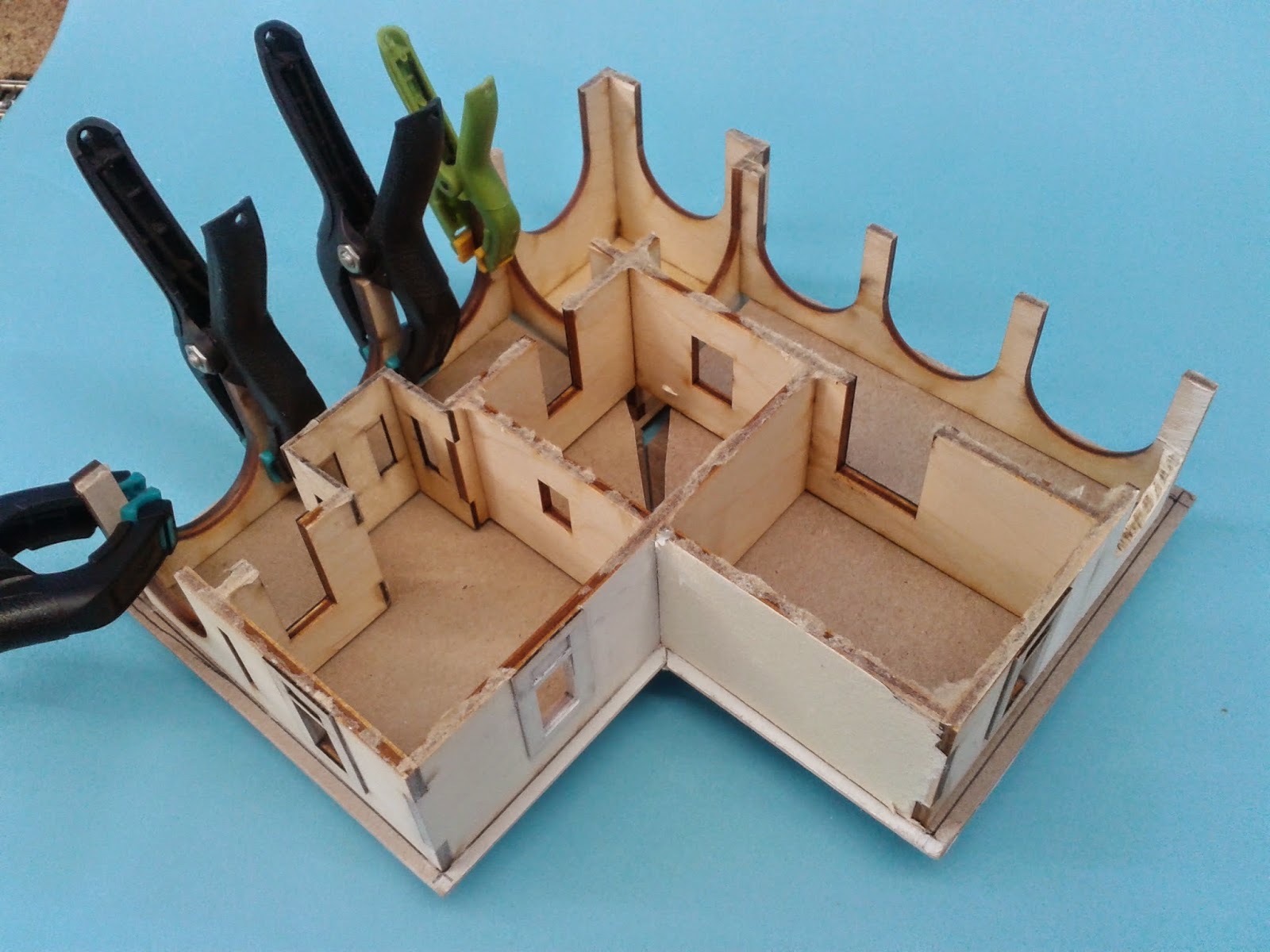 Assembling the main structure was as easy as building a commercial kit. I provided tabs and slots, so  putting the walls together was a snap. 2.5 mm is not thick enough for the brick walls so I doubled the walls for the collonade. I used clamps to hold the pieces together until the glue dried. 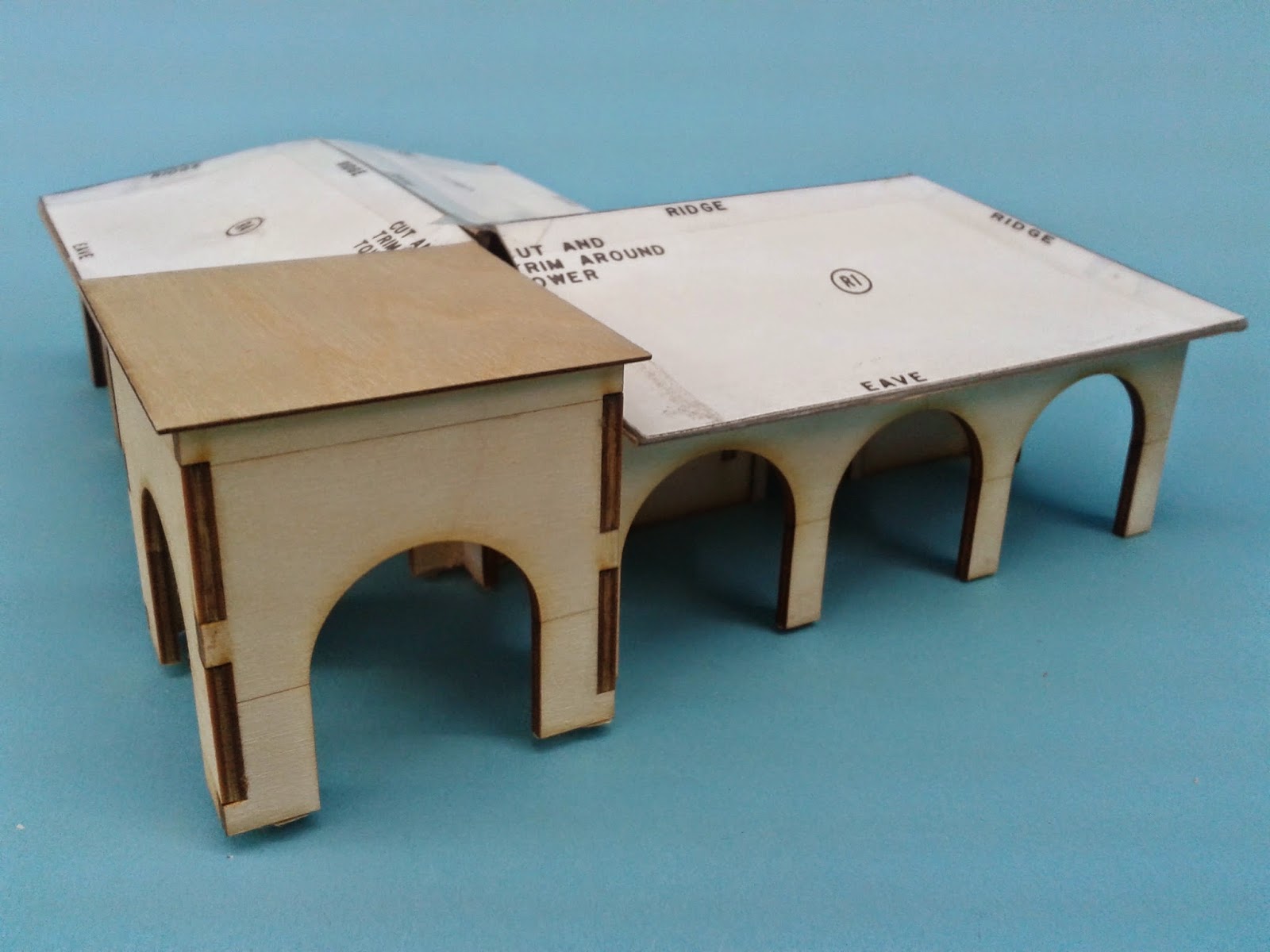 Here is the basic structure. I need to cover the tabs and slots with some kind of compound to get a smoother finish. The bell tower will be covered with foliage so I don't spend too much time on hiding the tabs there. 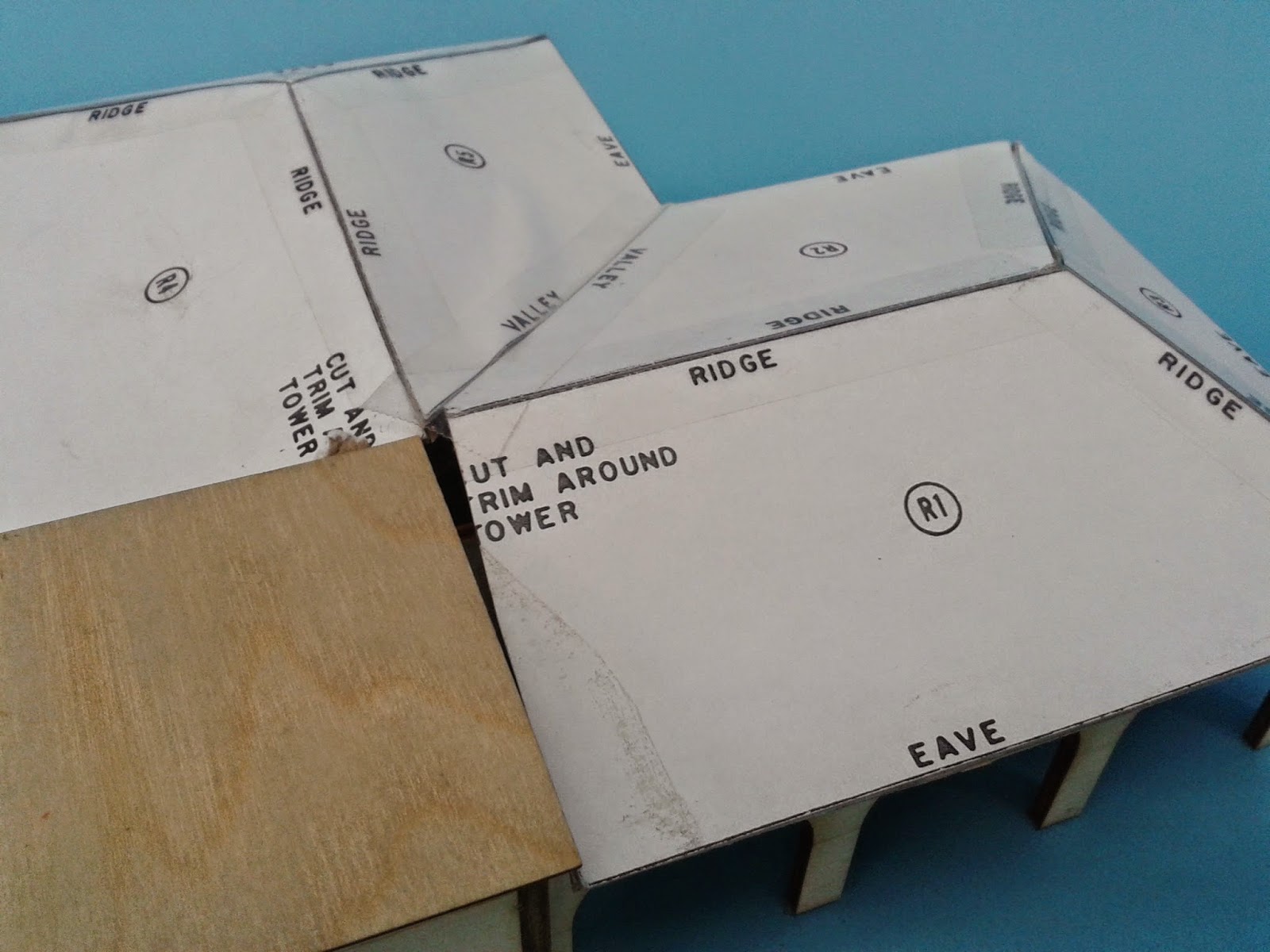 To get the slopes of the roof correct I used the templates from the vintage HSM (Historical Scale Miniatures) kit. 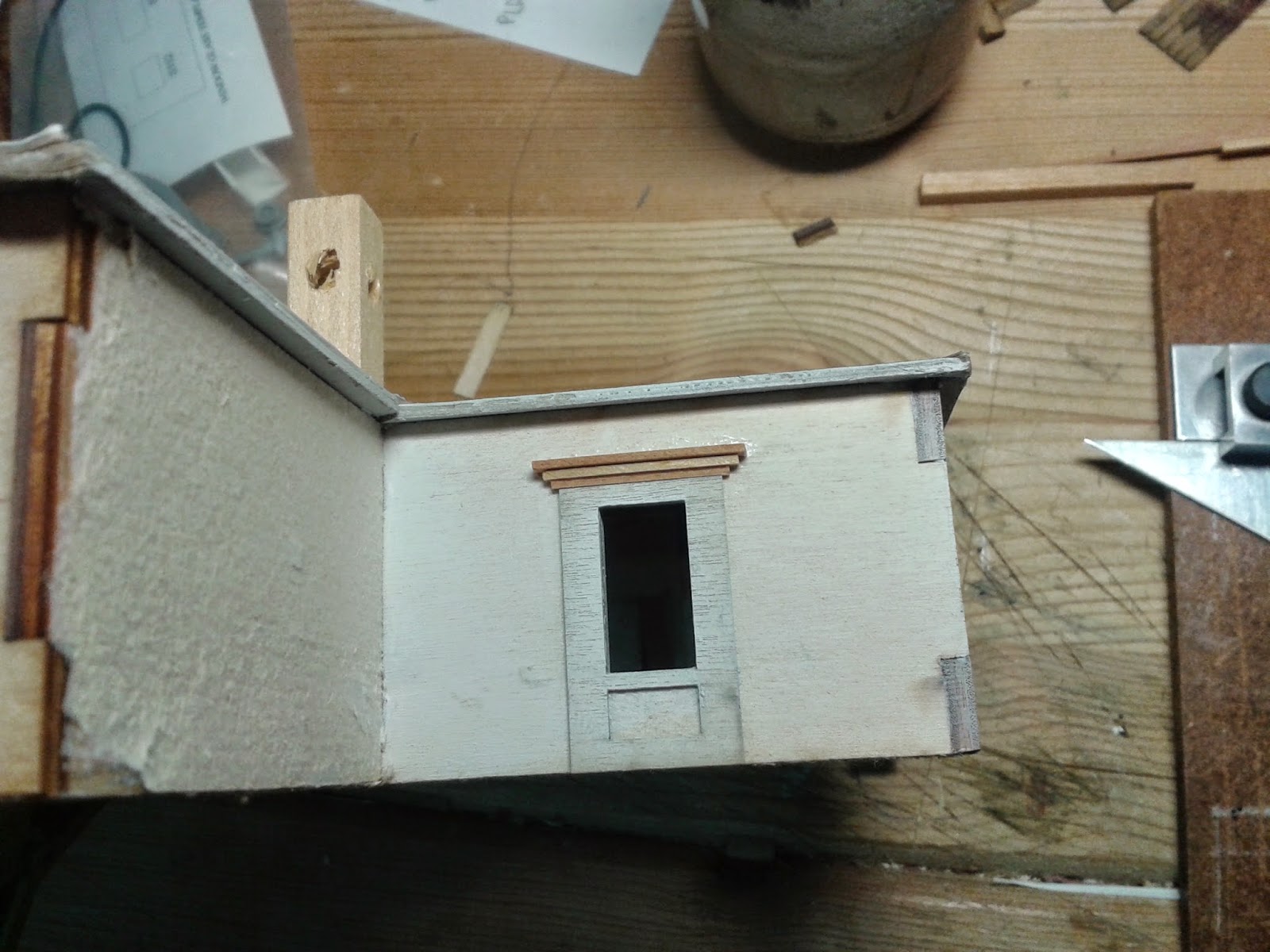 The doors and windows had a protruding brick trim. I recreated that using 3 different sizes of strip wood. 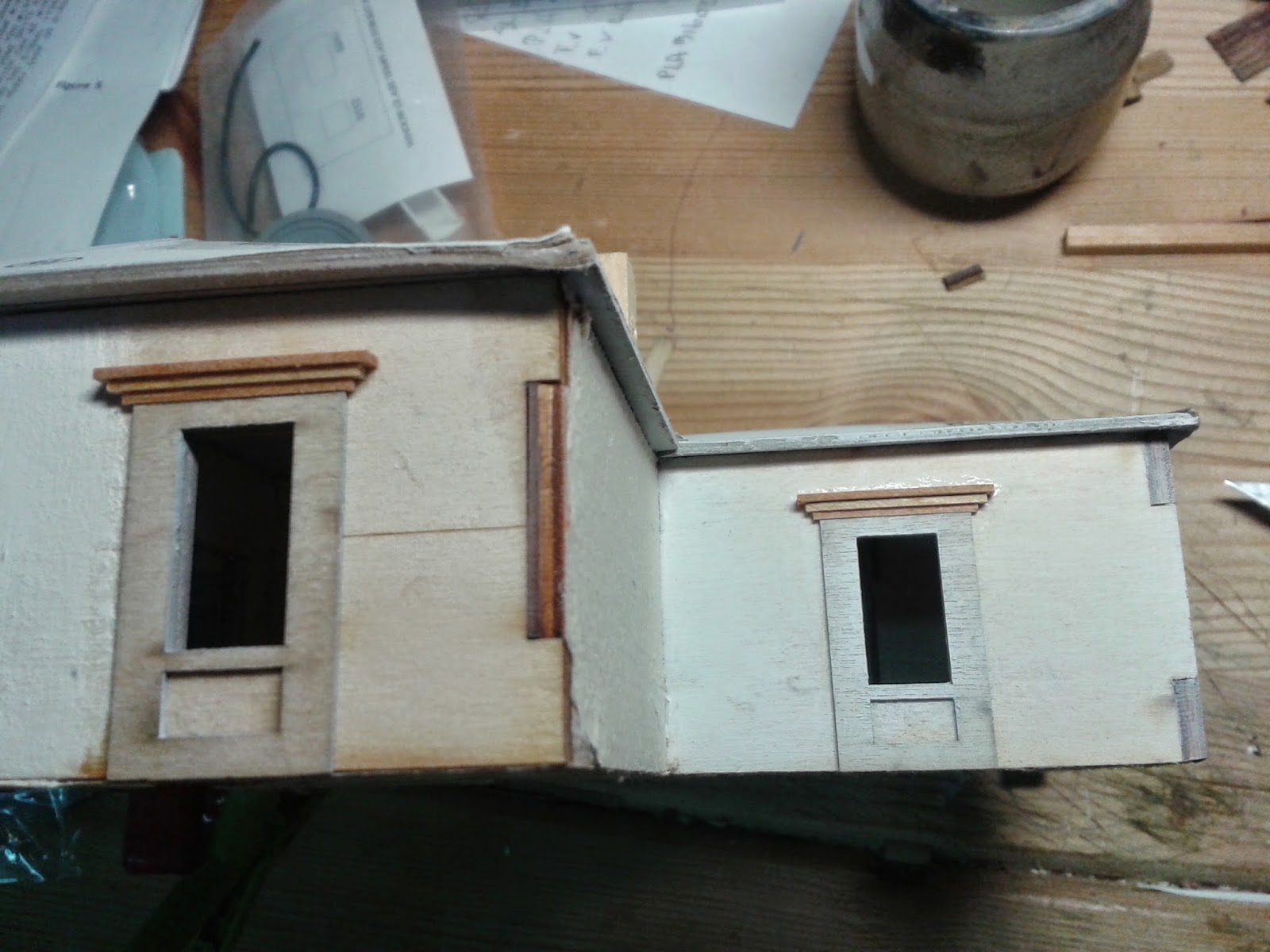 Stay tuned for the next progress of the depot soon.

Email ThisBlogThis!Share to TwitterShare to FacebookShare to Pinterest
Labels: Capistrano 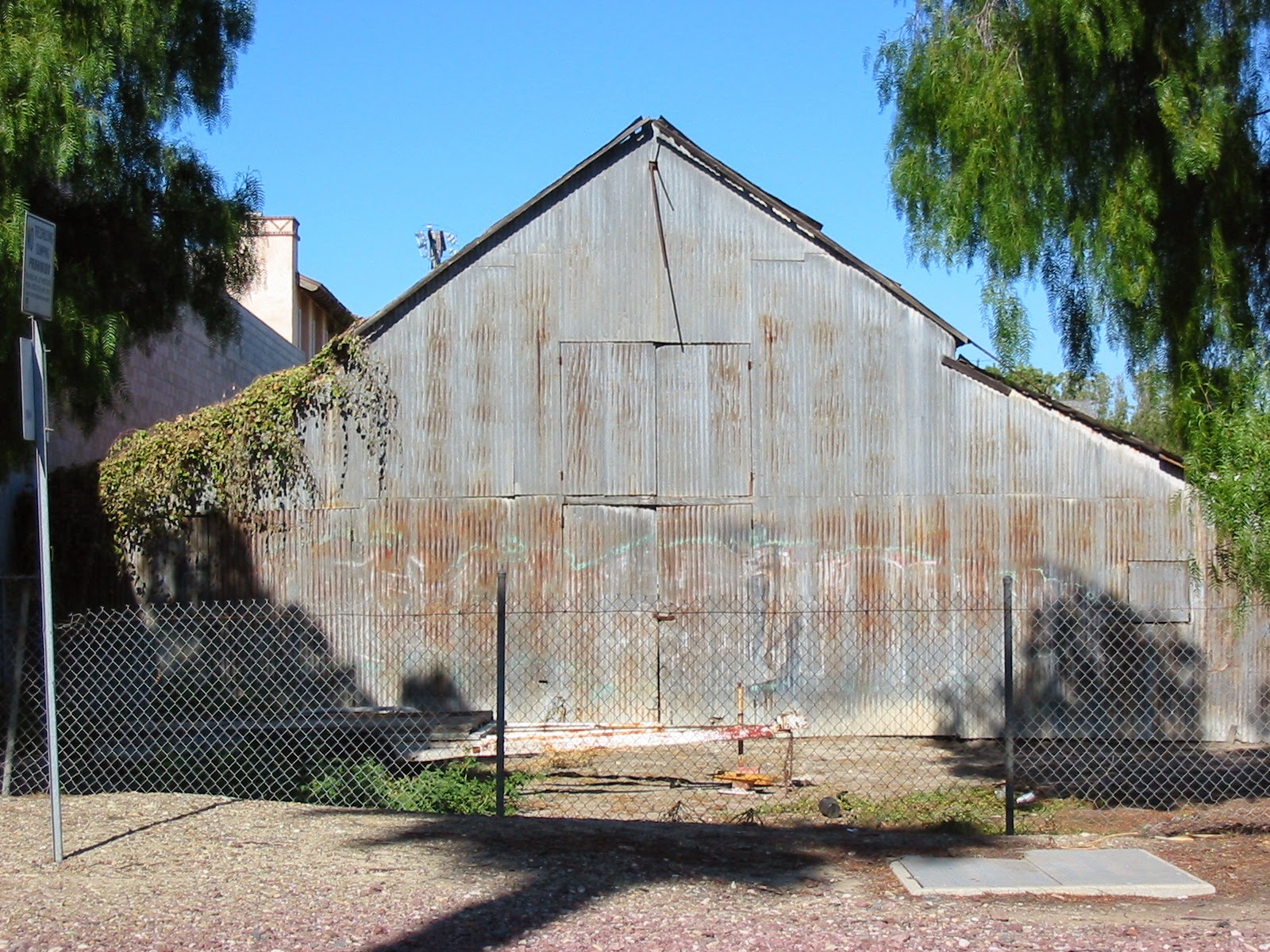 As I said in my previous blog entry, this would be a simple project based on the only straight-on photograph and an areal view that I have. 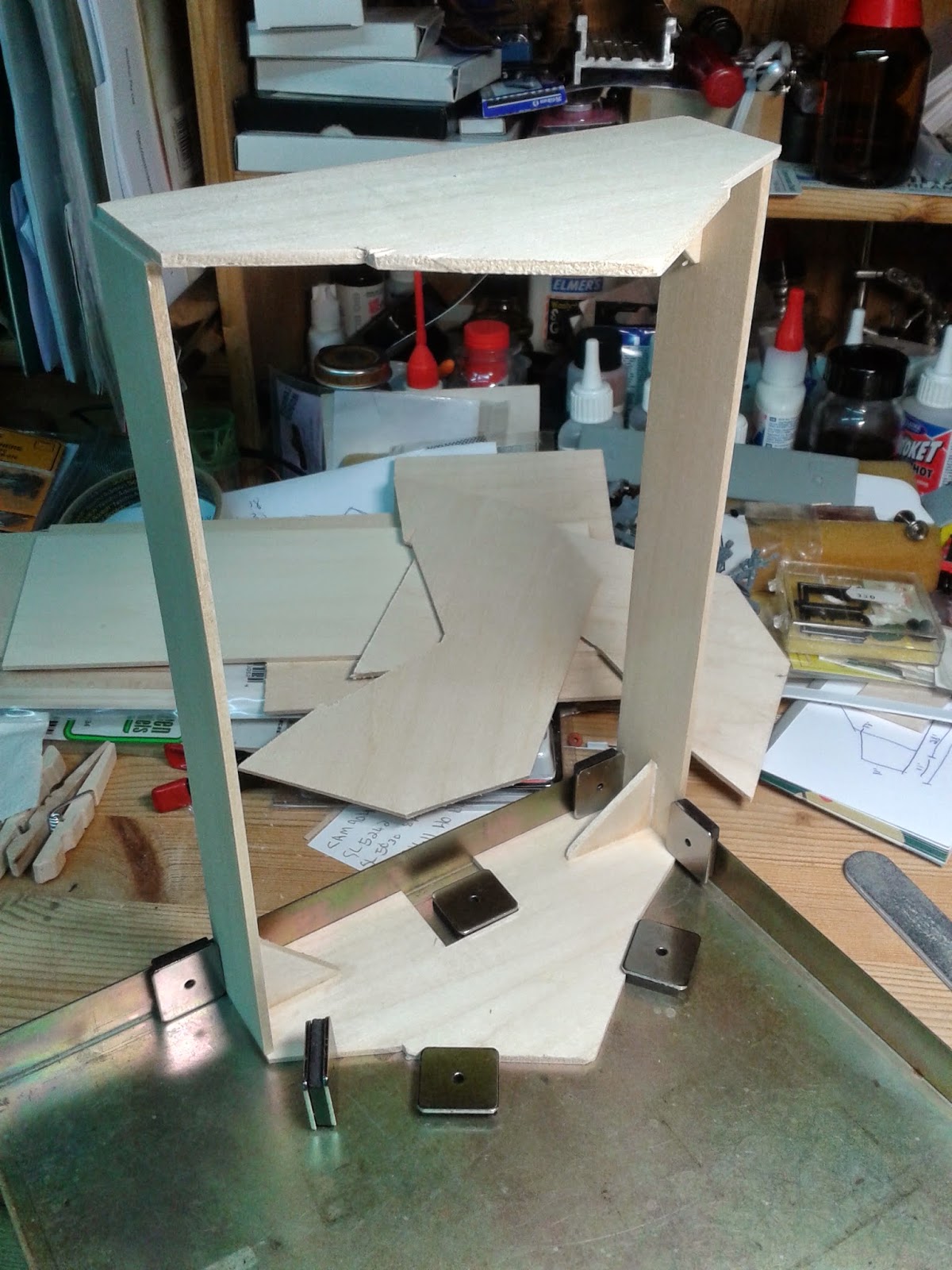 Using my Micro-Mark magnetic fixture I assembled the 4 wall sections, keeping them straight and square with the magnets until the white glue had set. 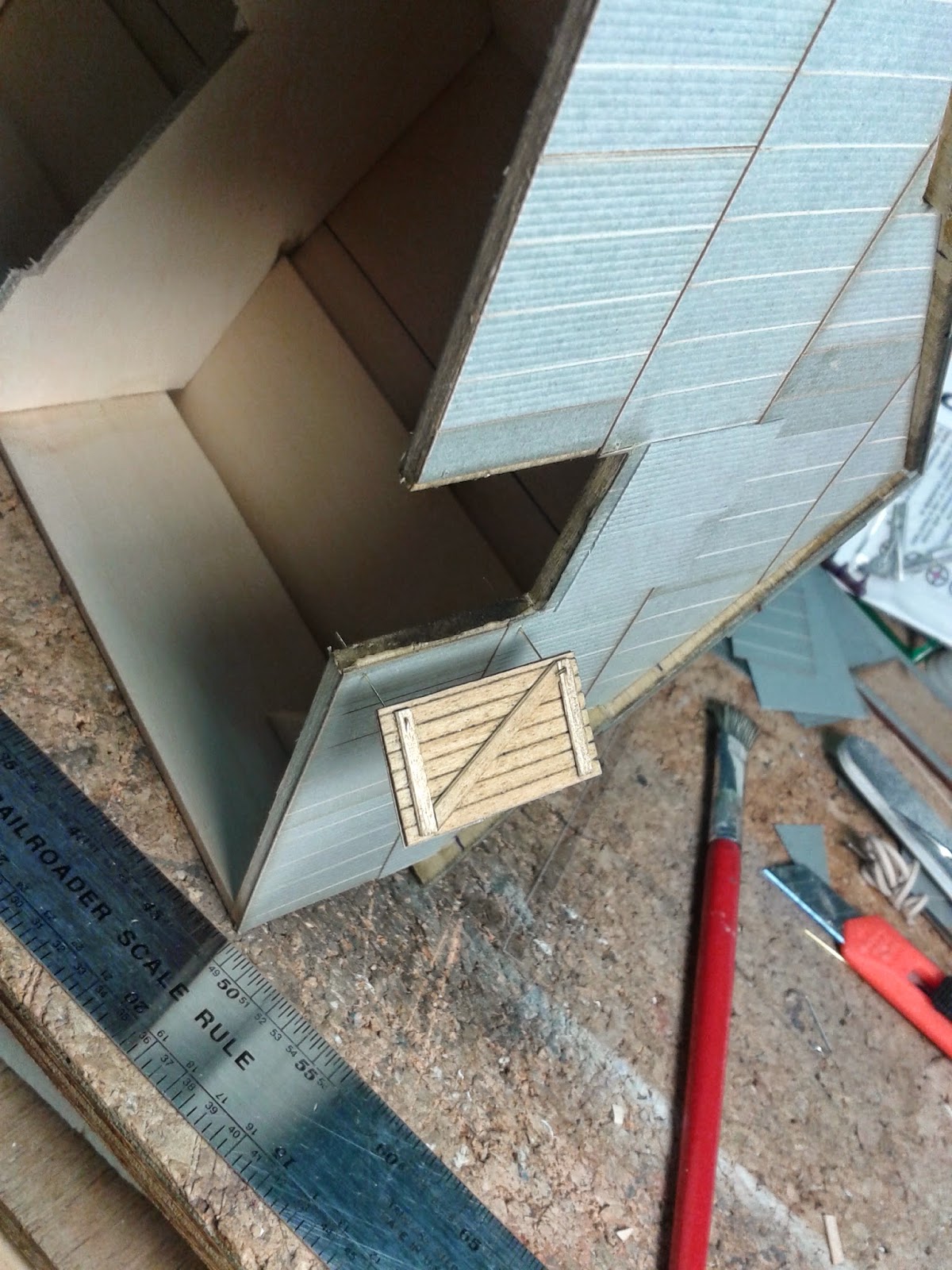 Then I glued the same corrugated carton pieces to the walls and the roof like the ones I used on my packing house. This was an easy straight forward process. 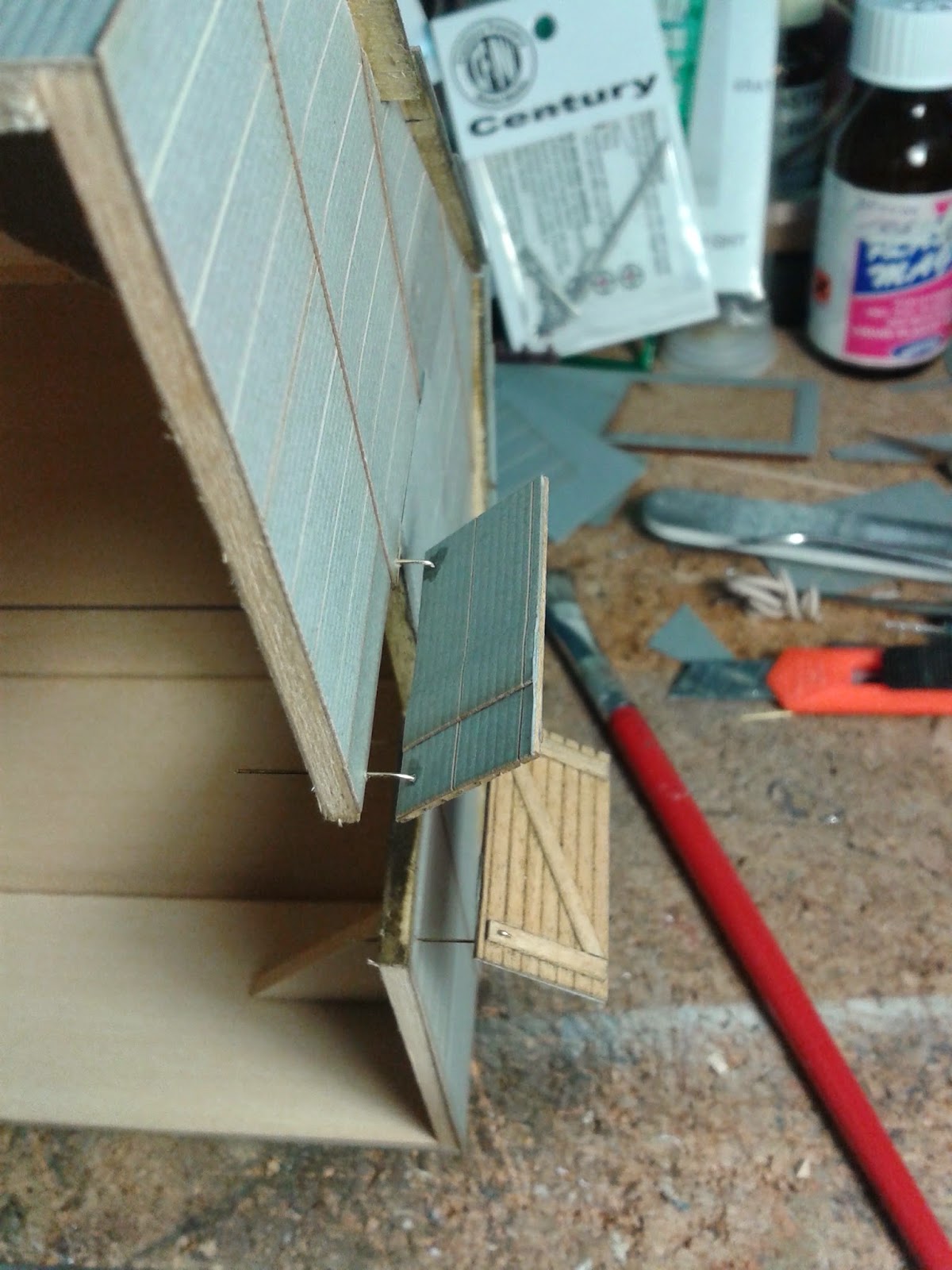 I wanted to show the barn doors open, so I cut 2 door panes from Northeastern scribed siding. Using single boards from the siding I fashioned the Z-bracing. On the outside of the doors I glued corrugated carton. To show the doors open I contemplated over a way how to do it without glueing the doors directly to the frame. I came up with the idea to drill a small hole at the top and bottom of each door and to insert a short piece of brass wire to serve as door hinge. This gave me the freedom to bend the doors open randomly. If I don't like the way they are opened I can still make some changes. 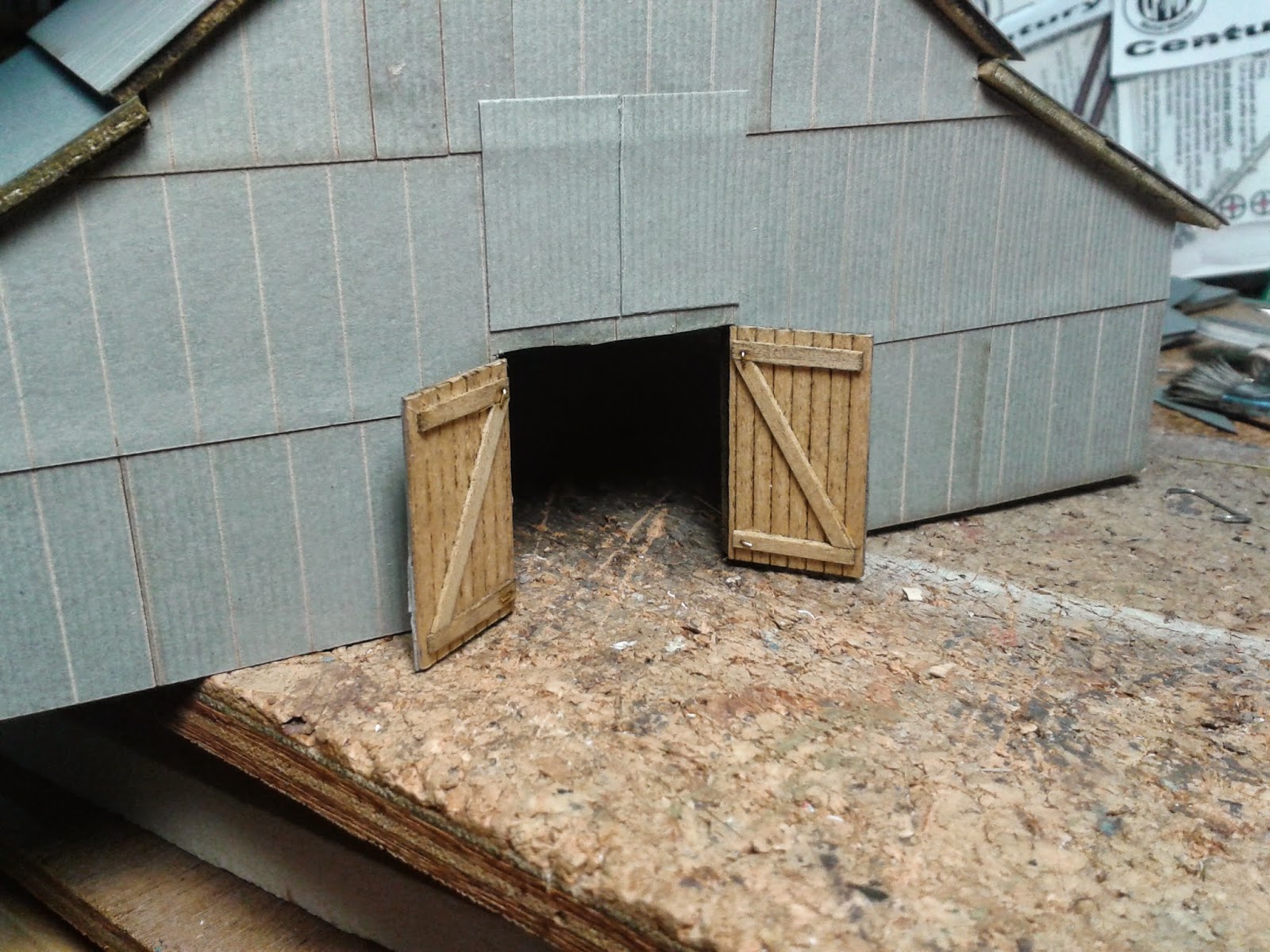 The photo above shows the opened doors. In the close-up I must admit that I don't really like my very simplistic way to show the hay loft doors. I probably cut them out and make new ones. :) 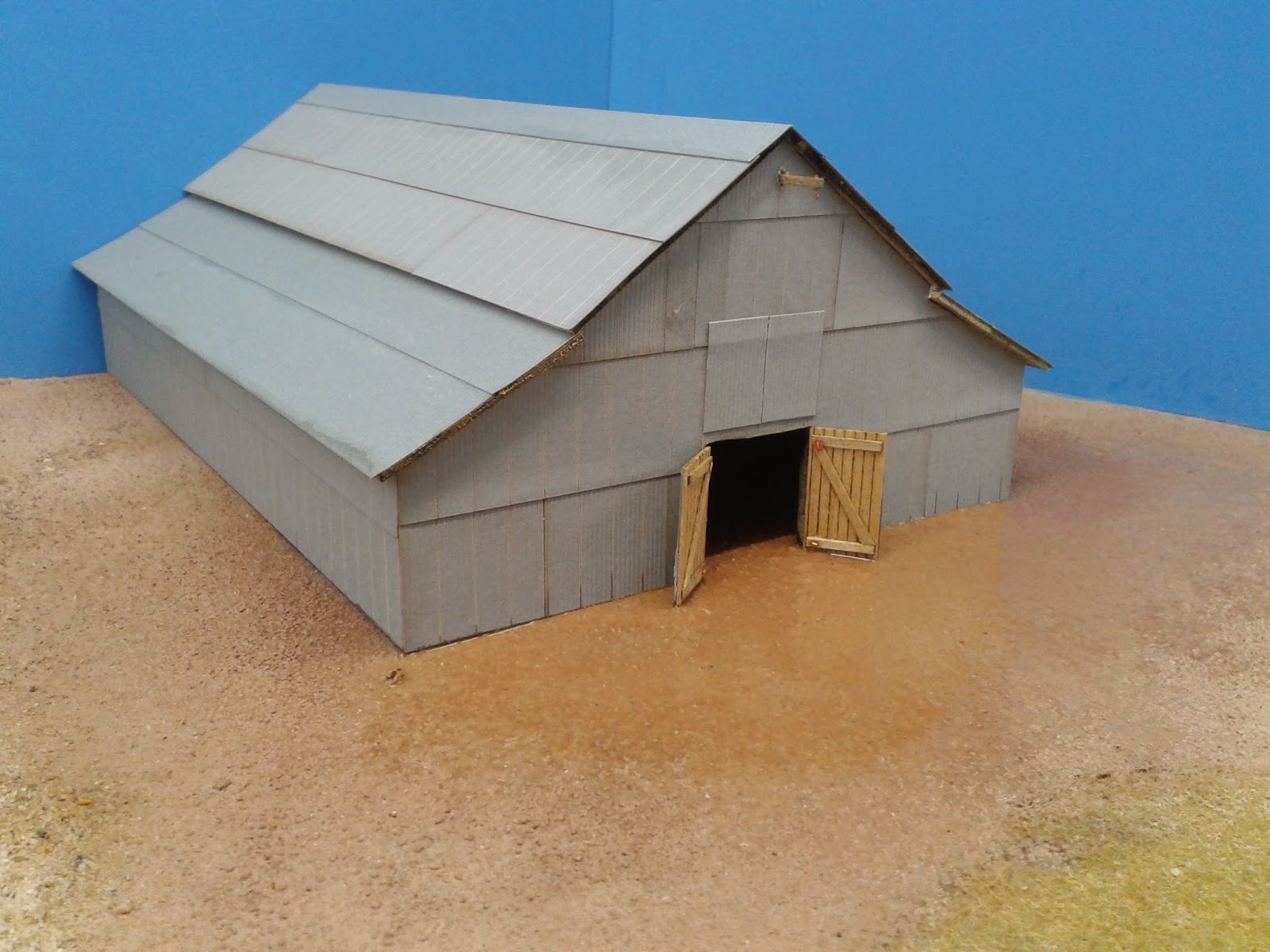 Test-fitting the barn on the layout 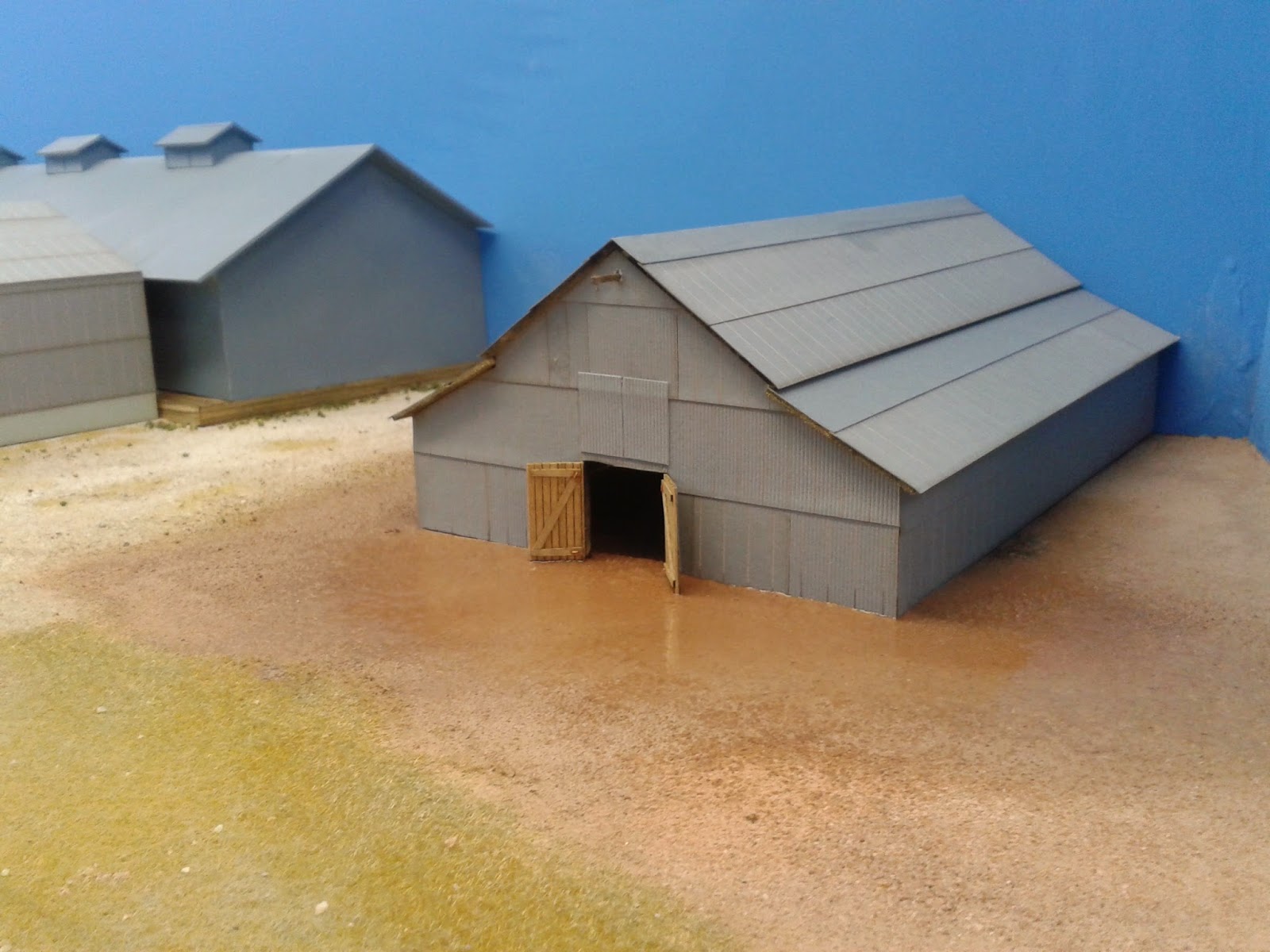 What looks like a major rain shower is actually the wet compound. I still need to build the corral and to add some more ground cover. 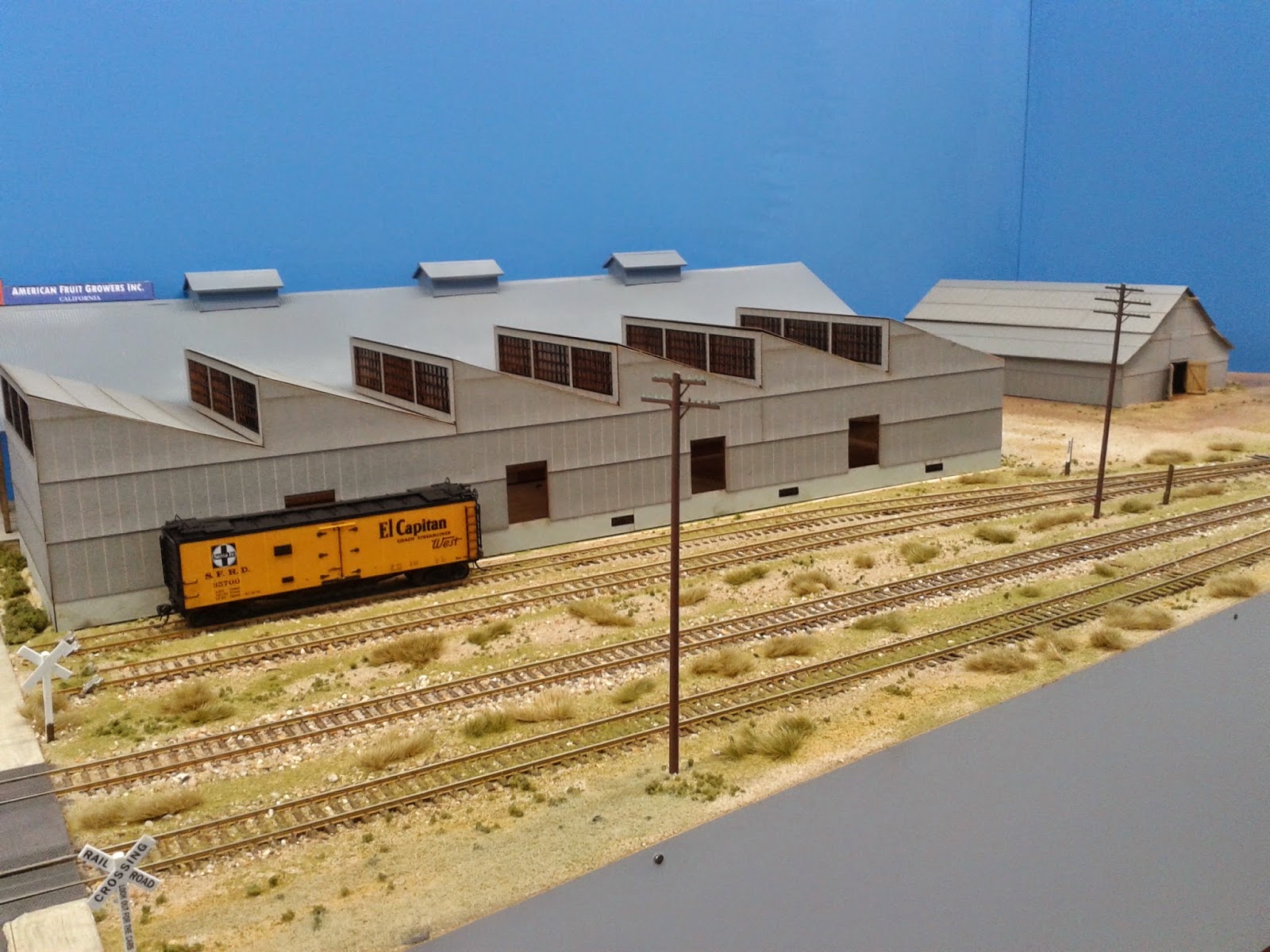 The barn completes the packing house scene on the southern part of San Juan Capistrano.
Posted by Alain Kap at 1:00 PM No comments: